Parsha Bo  בֹּא is translated as “Go!”. It’s the fifteenth Torah reading in the annual reading cycle and third in sefer Shemot, the book of Exodus.

Parsha Bo begins with YHVH discussing the Pharaoh’s heart with Moses. He explains release of the locusts on Egypt. Following this next two judgements are darkness and the death of the first born.  The lamb sacrifice and the Passover is introduced.

Bo בֹּא is the fifth word and in the Hebrew text (see text below).

Parsha Vaeira וָאֵרָא‎ is translated as “and I appeared”. It’s the fourteenth Torah reading in the annual reading cycle and second in sefer Shemot, the book of Exodus. I found three different spellings – “va’era”, “va’eira”, or “vaera”

Parsha Vaeira begins YHVH introducing himself to Moses as the God of Abraham, the God of Isaac, and the God of Jacob. He informs Moses, they did not know him as YHVH. YHVH recalls the covenant promise of the land of Canaan. He charges Moses and Aaron with the task of speaking to Israel and the Pharaoh. Parsha Vaeira contains the first seven plagues released on the Egyptians.

Vaeira וָאֵרָא‎ is the first word in the third verse in chapter six. See the Hebrew text below.

Parsha Shemot שְׁמוֹת is translated as “names“. It’s the eleventh Torah reading in the annual reading cycle and first in sefer Shemot, the book of Exodus. I found three different spellings – “shemot”, “shemoth”, or “shemos”

Parsha Shemot begins with a list of Israel’s descendants who went into Egypt. Israel increases in number. Pharoah becomes fearful of their numbers and their allegiance to Egypt. He goes through a series of enactments to prevent Israel’s continued population growth.

In the middle, Moses is born and adopted into the Pharaoh’s house. Later he kills and Egyptian beating on a Hebrew. He flees Egypt to Midian. He meets Jethro’s daughters and then Jethro. Jethro gives him Zipporah. Moses becomes a shepard tending Jethro’s flocks.

Moses sees a burning bush not consumed by the fire. He approaches it. YHVH speaks to him. They have a conversation. YHVH commissions Moses of a task. Then sends him to meet his brother Aaron. Finally in Egypt he begins the task given to him. Parsha Shemot ends with God informing him the hand of the Lord is about to be loosed on the Pharaoh.

Shemot שְׁמוֹת is the second word and in the Hebrew text (see text below). 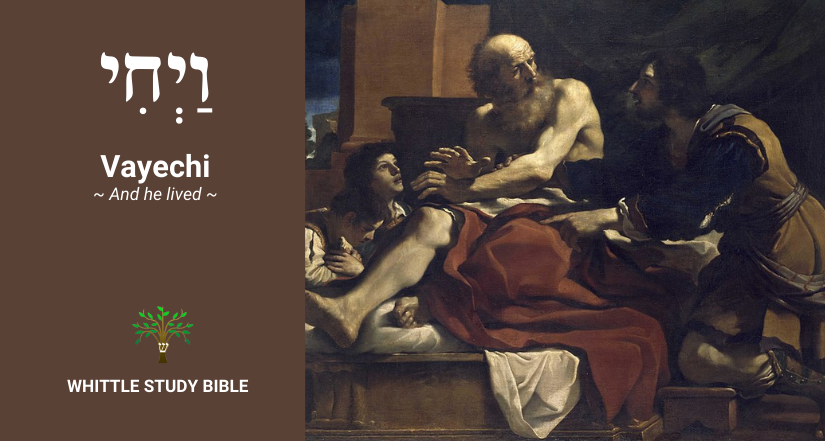 Parsha Vayechi וַיְחִי is translated as “And he lived” and is the twelveth Torah reading in the annual reading cycle. There are three ways to spell “Vaychi”, “Vayechi”, or “Vayhi

Parsha Vayechi begins with a 147 year-old Jacob dying. He asks Joseph to swear to place his body in Machpelah. He agrees. Jacob blesses Manasseh and Ephraim. Then Jacob blesses his sons. Jacob dies and Joseph buries him in Canaan. Joseph promises his brothers everything is good. Joseph’s grandsons are born. Joseph dies.

Vayechi וַיְחִי is the first word and in the Hebrew text (see text below).

Parsha Vayigash וַיִּגַּ֨שׁ is translated as “and drew near” and is the eleventh Torah reading in the annual reading cycle. I found two ways to spell it – “vayigash” and “vaigash”

Parsha Vayigash begins with Judah approaching Joseph. He tells him the back story of his personal pledge for Benejamin to their father. Joseph breaks down and reveals himself to his brothers. He explains about the famine and how God sent him into Egypt.

The Pharoah hears the news of Joseph’s brothers being here in Egypt. Joseph tells his brothers his story in Egypt. He gives them supplies and tell them to bring their father to him. The brothers return to Canaan and tell their father about Joseph in Egypt. Israel agrees to leave Canaan to go to Egypt. He wants to see his son before he dies.

Before leaving Canaan, he goes to Beersheba to offer a sacrifice to God. God speaks to him through night visions. God promises to be with him in Egypt. God also promises Israel will become a nation in Egypt.

Once in Egypt, Israel sees Joseph his son, meets the Pharoah and is given the land of Goshen. Thereafter, we see the continued works of Joseph for the Pharoah.

Vayigash וַיִּגַּ֨שׁ is the first word and in the Hebrew text (see text below). 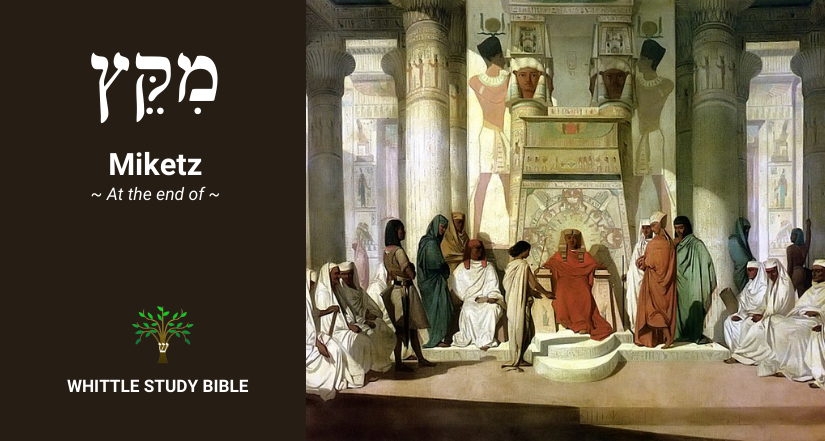 Parsha Miketz מִקֵּץ‎ is translated as “at the end”. Parsha Miketz is the tenth Torah reading in the annual reading cycle. I have found ways three ways to spell it – “miketz”, “miqetz”, or “mikeitz”.

Parsha Miketz begins with Pharoah’s having two dreams. He attempts to find the interpretation of the dreams. None of his fortune tellers or wise men can provide an interpretation of the dreams. The butler (cupbearer) informs the Pharoah about Joseph and his ability to interpret dreams. The Pharoah calls Joseph to himself. The Pharoah tells the dreams to Joseph. Jospeh interprets the dream and recommends a plan of action and a resume of the type of man to execute the plan. The Pharoah selects Joseph takes action to place him in the second position in all of Egypt. Joseph has sons and fulfills the gathering and storing of food plan.

A world-wide famine occurs. Jacob sends the sons to Egypt to buy grain. The test of the brothers begins with Joseph. Reuben, Judah, Simeon and Benjiman are all named and play a visible role in this portion of the Joseph story. This Torah portion ends with the brothers returning to Egypt for a second time. They are arrested and brought before Joseph for the theft of his cup of divination. The decree is the enslavement of the guilty party.

Parsha Miketz מִקֵּץ‎ is the second word and in the Hebrew text (see text below).

Parsha Vayeshev תּֽוֹלְדֹ֥ת is translated as “And he settled” and is the nineth Torah reading in the annual reading cycle. I have found three spelling variations – “vayeshev”, “vayeishev”, or “vayeshab”

Parsha Vayeshev begins the story of Joseph. We are introduced to a 17-year-old Joseph talking about his dream of the sheaves. His four brothers understand the dream and hates him because of it. Shortly thereafter he talks about a second dream. In this dream the sun, moon and eleven stars bow to him. This time he tells his brothers and father. While the brothers hate him Israel loves him.

Israel so loves him he has a special garment made for Joseph. These two things cause a greater sibling rivalry. Now the brothers are jealous of him. This hatred and jealous causes the brothers to plot killing him. We are introduced to the only brothers named in the section – Reuben and Judah. They play a significate role in the story of Joseph.

Israel sends Joseph to his brothers. He travels throughout Canaan looking for them. He finds them in Dothan. There they hatch the plan to kill Joseph. Reuben saves his life by having him thrown into a pit.  A little later, Judah convinces the brothers to sell him to some Ishmaelite merchants instead of sheading his blood. They concede and sell him for 20 pieces of silver.

Now Joseph is out of the picture, the brothers kill a goat and place the blood on Joseph’s special garment. They take the tattered, blood-stained garment to Israel. He recognizes it. He rips his clothing, puts on sackcloth and ashes, and morns his son. He refuses to be consoled by his sons and daughters.

Meanwhile, Joseph is in Egypt. The merchants sell him to a eunuch named Portiphar.

Vayeshev וַיֵּ֣שֶׁב is the first word in the Hebrew text (see text below). 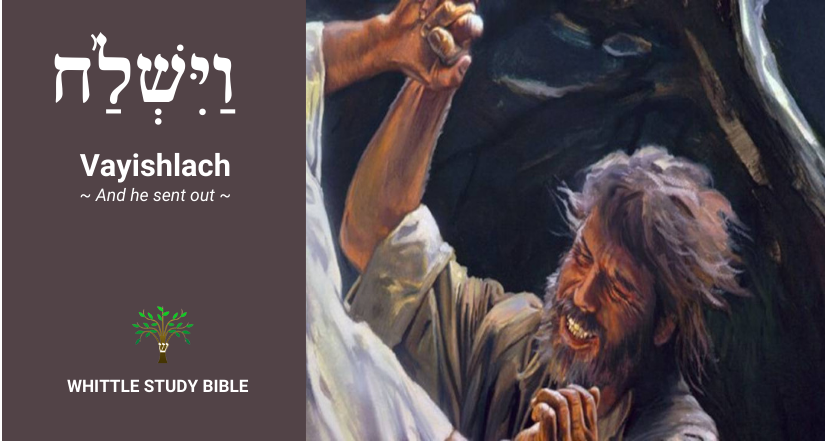 Parsha Vayishlach וישלח is translated as “And he sent out” and is the eighth Torah reading in the annual reading cycle. I have found two ways to spell it “vayishlach” and “vayishlakh”

Parsha Vayishlach begins with Jacob sending messages to Esau. Jacob wrestles with a mysterious stranger. This stranger gives him the name Israel. He limps to meet Esau. Esau and Jacob meet and come to a resolution. After leaving the meeting with Esau Jacob travels to the city of Shechem. He buys land in the plains of the city.

Dinah is raped and her brothers Simeon and Levi kill all the men in the city. Under Elohim’s direction Jacob travels to Beth-el. There Elohim appears to him again. He builds an altar and pours drink offerings and oil. Rachel dies while birthing Benjamin. Isaac dies and is buried by Esau and Jacob.

Parsha Vayishlach ends with a list of Esau’s descendants.

Vayishlach וישלח is the first word in the Hebrew text (see text below). 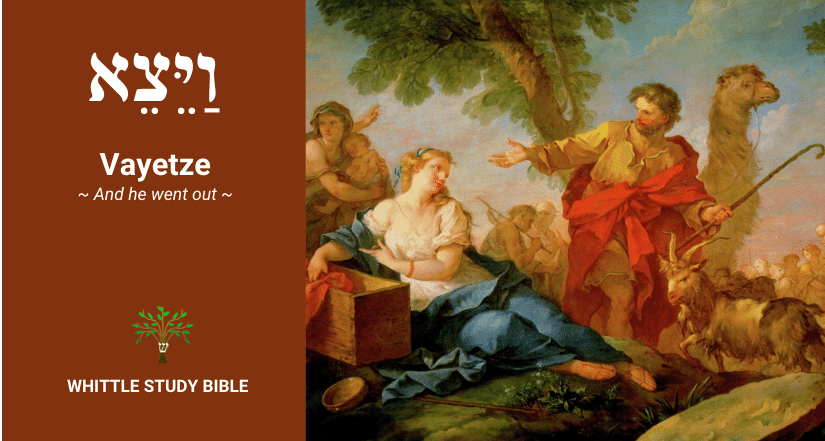 Parsha Vayetze וַיֵּצֵא‎ is translated as “And he went out” and is the seventh Torah reading in the annual reading cycle. I have found five ways to spell “vayetza”, “vayetze”, “vayeitzei”, “vayetzei”, or “vayetse”

Parsha Vayetze begins with Jacob’s Dream. It continues to declare his love for Rachel. He agrees to work for Laban for her to be his wife. Laban tricks Jacob and gives him Leah. He works another seven years for Rachel. There begins to be a rivalry between Leah and Rachel.

We begin to see the birthing of Jacob’s sons. He begins to make plans to leave Laban and return to Cannan. Vayetze ends with Laban and Jocab making a covenant together. Jacob leaves Laban.

In Vayetze וַיֵּצֵ֥א is the first word and in the Hebrew text (see text below). 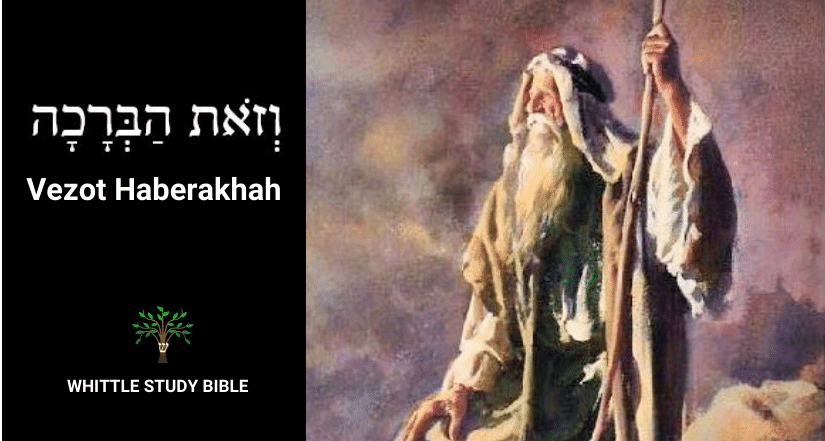 Parsha Vezot Haberakhah וְזֹאת הַבְּרָכָה is the fifty-fourth parsha in the annual reading cycle. It is the eleventh reading in Deuteronomy (Devarim). As per Rabbi Sacks, this parsha is not included in the covenant.

Vezot Haberakhah וְזֹאת הַבְּרָכָה is the first word and the first distinctive word in verse 1. See the Hebrew text below.