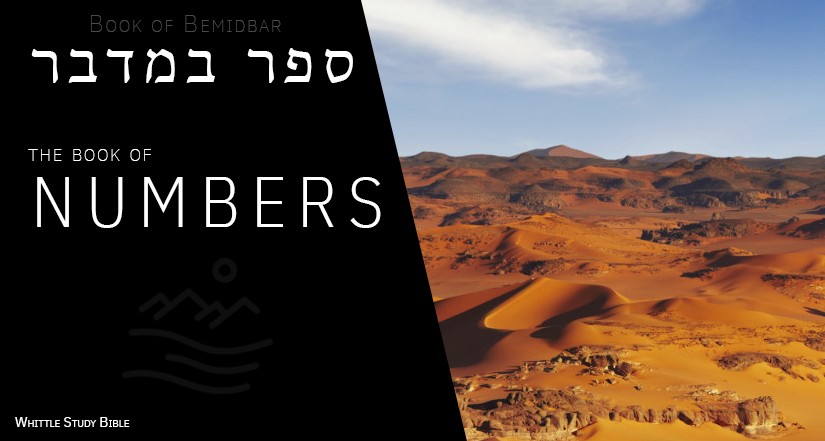 Name: The oldest name for the fourth book of Moshe’s writing is ‘the Fifth of the Musterings“; i.e. that one of the five books of Moshe which describes the numbering of the Israelites. Later it became known by the fourth word in the opening sentence – Bemidbar, “in the wilderness” — a name that lends a unity of time and place to the varied happenings and laws in the Book. The current English designation “Numbers” is derived from the Septuagiant. (Hertz, JH. Pentateuch & Haftorahs Sconcino Press London 1994 P567)

Traditionally and normally, it is called the fourth book of Torah. However, when dealing with the Hebrew text Numbers (B’midbar) can also be called the fifth and sixth book of Torah. See Explanation “Backward / Upside Down Nuns” in “Hebrew Anomaly” for more information.

The source for all the English stats are from my Dake’s Bible. I understand that controversy around this Bible but for now this is the best that I have and when I find better sources I will correct this data.

* “In the Hebrew, words are sometimes found duplicated. It is often the end of one sentence bumped up against the beginning of the next. E.g. “… was Noah. Noah began to…”.

In any other language or philosophy, such doubling would go unnoticed. But Chabad philosophy seeks meaning in every detail, so they include this in their statistics,” says David Negley (member of a closed Messianic group on Facebook) Each double word instance has several teachings related to them.

Source for these stats

In Numbers (B’midbar) 10:34,35 there are two backward / upside-down nuns. See the picture below. Like most things dealing with the Hebrew text, there are several explanations for this anomaly. Some Rabbis teach these two verses are a Torah “book” unto itself making this the fifth book of Moses.The sixth book begins in 10:36. Now that would make Deuteronomy (Devarim) the seventh book of Torah.

In Numbers (B’midbar) 14:17 there is a enlarged yod. The verse reads, “And now, I beseech thee, let the power of my lord be great, according as thou hast spoken, saying,”. “Be great” יִגְדַּל begins with an Enlarged Yod. For a referance point count eleven letters to the left of the highlight yod to a regular size yod, in the picture below.

In Numbers (B’midbar) 25:12 there is a broken vav. The broken vav appears in the word “shalom”. Where G-d says, “Wherefore say, Behold, I give unto him my covenant of peace” I read on a thread, there are twenty different Rabbinical teaching explaining the broken vav. In the image below you can count two letters to the left of the broken vav and see a regular vav. In Numbers 27:5 we have the only place in the Scriptures where there appears an enlarged nun sofit.KJV reads, “And Moses brought their cause before the Lord.” “Their cause” is the translation of mishpat. In the picture below you can see a regular size nun sofit directly above it. Can you see the difference?

Since you have finished reading all the background information about Numbers. Let’s dive into reading the text. Click your preferred chapter link below.