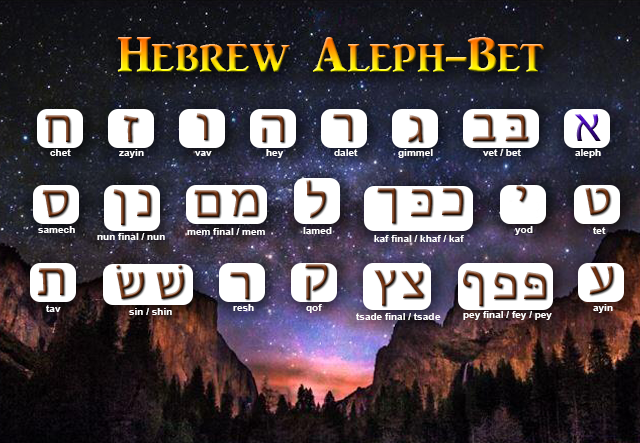 Hebrew is the only language I have desired to learn.  Once, I decided to learn it, I quickly realized there is a lot of information on Classic (Biblical) Hebrew. So, I decided to create this simple post with the most basic of ideas about Hebrew.

Here are a few facts about this wonderful language.

Hebrew is a concrete language which means that is a langage that always appeals to the five-senses – taste, touch, seeing, hearing, and smelling – as such it does not have abstract ideas.

Hebrew contains only about 4,000 words this makes it easy to learn. Don’t get it twisted, Hebrew is extremely rich in meaning.

Each Hebrew letter has a name in both English and Hebrew. Each letter  represents a number. However here we will not discuss all of that information.

This is the go to Hebrew Grammar for my Hebrew teacher – Yoel HaLevi. He uses this as his base text. As a Jewish Scholar he has some very cool insights. You can reach out to him at his website – Hebrew in Israel. Let him know that I sent you.

As you would expect with any ancient language it has different eras (ancient, classical, and modern). Each of these eras have their nuances on the language.

This post is a pool of information that I have gathered from the online videos courses, webiste such as hebrew4christians.com, and offline sources like school teachers, and books too.

It is my sincere hope that this very basic lesson will provide you an easy, clear-cut introduction to Biblical Hebrew.

In this video Dr. Anne Davis teaches the first half of the Hebrew Aleph-Bet in less than sixteen minutes! She groups the letters together and calls these groups “clusters”. I have listed the letters below the video in the “clusters” she uses.

Make sure you take the time to look at the writing below the video. There is additional information that may assist you in learning the Aleph-Bet.

Aleph —א
Alpeh is first letter of the Aleph-Bet. The name of this letter is pronounced as “Ah-lep”. Aleph is silent.
Bet — בּ / Vet — ב
Bet is the second letter. It rhymes with “mate”. Bet says “b” as in “boy”. The “dot in the middle” is called a dagesh.
Vet says “v” as in “vine”. Notice the dagesh mark is not in the vet.
Gimel — ג
Gimel is the third letter and it is pronounced as “geeh-mel”. It sounds like the “g” in “girl”.
NOTE: I seen it spelled two ways. Dr. Davis spells it here G-I-M-E-L and I’ve seen it spelled with an extra “m” as G-I-M-M-E-L.
Dalet — ר
The fourth letter is dalet. It is pronounced as “dah-let”. It sounds like “d” as in “door”.

NOTE: Dr. Davis points out the similarity between the letters Vav ו and the Zayin ז. There are several letters that look the same. Keep a close eye for these letters.

The third cluster, like the first, contains a total of 4 Hebrew letters. These letters are chet, tet, yod, & kaf

Don’t proceed until you have learned the first eleven letters. After a quick review Dr. Davis will continue with the lesson.

Lamed — ל
The twelveth Hebrew letter is Lamed. It is pronounced as “lah-med” and it sounds like the “l” in “look”.
Mem — מ
The thirteenth Hebrew letter is Mem. Mem says “m” as in “mom”. This form of mem is considered an “open” mem.
Mem is the second of five letters with a final form. It will appear like this ם. It’s called a closed Mem because it looks like a box. Notice that is looks like Samech ס Unlike other final form letters it does not always appear at the end of a word – these are believed to have special meanings.
Nun — נ
The fourteenth letter is Nun and is pronounced as “noon”. Nun says “n” as in “now”.
Nun is the third of five final form letters. It will appear like thisן. Notice how final Nun looks similar to Vav ו

Samech — ס
The fifteenth Hebrew letter is pronounced “sah-mekh”. Samekh says “s” as in “son”.
Like chet it has a guttural sound like “ch” as in “bach“
NOTE: I’ve seen two spellings (1) S-A-M-E-C-H and (2) S-A-M-E-K-H
Ayin — ע
The sixteenth letter of the Hebrew Aleph-Bet is silent. It is pronounced as “ah-yeen”. Although silent it normally associated with a vowel.
Pey — פּ / Fey — פ
Pey is the seventeenth letter of the Hebrew Aleph-Bet. When it has the dagesh it will rhyme with “pay”. Pey says “p” as in “park”.
Fey says “f ” as in “fox” or “ph” as in “phone. This is used when verbally spelling a word that contains Pey without the dagesh.
Pey is the fourth of five final letters. In final form it sounds like pey. Notice that it final pey ף looks similar to fey פ
NOTE: I’ve seen three spellings for this word (1) P-E, (2) P-E-Y, and (3) P-A-Y. Dr. Davis uses the third spelling in the video.
Tsade — צ
This is the eighteenth letter of the Aleph-Bet. It is pronounced “tsah-dee”. Tsade says “ts” as in “nuts“.
The last of the final form letter appears like this ץ. Notice how similar the final form looks to the regular form צ.

Only four letters are left. Lets knock this last letters out.

Qof — ק
The nineteenth Hebrew letter is Qof. It is pronounced as “kop”. Qof say “q” as in “queen”.
Resh — ר
The twentieth letter is resh. Resh is pronounced “raysh”. Resh says “r” as in “rain.
This is a guttural letter.
Shin — שׁ / Sin — שׂ
The twenty-first letter has two sounds depending on the location of the dot. If its located the upper right-hand side שׁ “Shin” says “sh” as in “shy” Also pronounced as “sheen“.
If the dot is located in the upper left-hand side שׂ. “Sin” says “s” as in “sun”.
Tav — ת
The twenty-second and last letter of the Hebrew Aleph-Bet is tav. Tav says “t” as in “tall”.

Congratulations you have successfully learned or reviewed the aleph-bet.

There are tons of resources for learning Hebrew. If you are serious about learning this wonderful language, I have listed a few resources below that I know that will certainly help you.

The First Hebrew Primer: The Adult Beginner’s Path to Biblical Hebrew, Third Edition is one used by many teachers.

Answer Book for The First Hebrew Primer is an answer book that may assist you with the exercises in the pervious book.

As an added measure, here is an excellent Hebrew lexicon. A Concise Hebrew and Aramaic Lexicon of the Old Testament I just discovered this lexicon and I must say it seems much easiler to use than the BDB Lexicon that I have used in other posts.

The Hebrew Alphabet is called the Aleph-Bet. It is named after the first two letters.

The Aleph-Bet contain 22 letters – 4 have gutturals sounds and 5 have final forms. Final forms are sometimes called “double forms”, in Hebrew they are called “sofit”-pronounced “so-feet”.

In my personal search to learn Hebrew, I found it very hard to locate a simple, quick and easy, bare-bones lesson that was not childish.

This is one of the reasons that I created this post.

I have also heard it said that you should review 1 week, 1 month, and 1 year after you have learned something. This post was an exercise of review for me.

Also, I want to thank all of the people that are helping me to learn this wonderful language. A shout-out to Izzy Avraham, John Parsons, Kevin Saitta, Derrick Leman, Sonia Hammonds, and Yoel Halevi.

I hope that you really enjoyed this lesson. Feel free to share this page with your friends who may be interested in learning Hebrew.