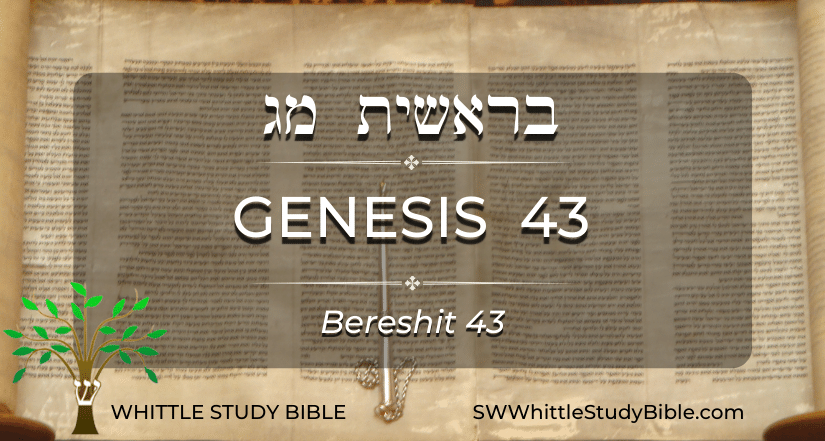 Genesis 43 (Bereshit) continues the narrative of the reconciliation of the sons of Israel. Joseph continues to test his brothers’ honesty, sense of fraternal love, and responsibility.

The famine and lack of grain creates the need to make another purchase from Egypt. Israel orders his sons to purchase grain from Egypt. Judah refuses to go unless Benjamin is allowed to go with them. He offers a pledge to his father Israel. Israel agrees to the terms. He provides instructions to the brothers concerning purchasing the needed grain. The sons follow the instructions.

Joseph recognizes Benjamin. He orders his servant to take them to his home. Once the servant approaches, the brothers plead their case and their cause. He reassures them and releases Simeon to them. Then he takes the eleven brothers to Joseph’s house. They are afraid.

The brothers prepare the offering for Joseph. Bowing to Joseph, they present the offering and themselves to him. Joseph questions them about their father and Benjamin. They answer. Joseph blesses Benjamin. Joseph exits the room. Upon entering another room, he cries.

Joseph returns and orders food. Everyone is seated according to their customs. Benjamin receives five-time the portion of his brothers. Everyone drinks and enjoys themselves.

1 And the famine was sore in the land.
2 And it came to pass, when they had eaten up the corn which they had brought out of Egypt, their father said unto them, Go again, buy us a little food.
3 And Judah spake unto him, saying, The man did solemnly protest unto us, saying, Ye shall not see my face, except your brother be with you.
4 If thou wilt send our brother with us, we will go down and buy thee food:
5 But if thou wilt not send him, we will not go down: for the man said unto us, Ye shall not see my face, except your brother be with you.
6 And Israel said, Wherefore dealt ye so ill with me, as to tell the man whether ye had yet a brother?
7 And they said, The man asked us straitly of our state, and of our kindred, saying, Is your father yet alive? have ye another brother? and we told him according to the tenor of these words: could we certainly know that he would say, Bring your brother down?
8 And Judah said unto Israel his father, Send the lad with me, and we will arise and go; that we may live, and not die, both we, and thou, and also our little ones.
9 I will be surety for him; of my hand shalt thou require him: if I bring him not unto thee, and set him before thee, then let me bear the blame for ever:
10 For except we had lingered, surely now we had returned this second time.
11 And their father Israel said unto them, If it must be so now, do this; take of the best fruits in the land in your vessels, and carry down the man a present, a little balm, and a little honey, spices, and myrrh, nuts, and almonds:
12 And take double money in your hand; and the money that was brought again in the mouth of your sacks, carry it again in your hand; peradventure it was an oversight:
13 Take also your brother, and arise, go again unto the man:
14 And God Almighty give you mercy before the man, that he may send away your other brother, and Benjamin. If I be bereaved of my children, I am bereaved.
15 And the men took that present, and they took double money in their hand, and Benjamin; and rose up, and went down to Egypt, and stood before Joseph.

16 And when Joseph saw Benjamin with them, he said to the ruler of his house, Bring these men home, and slay, and make ready; for these men shall dine with me at noon.
17 And the man did as Joseph bade; and the man brought the men into Joseph’s house.
18 And the men were afraid, because they were brought into Joseph’s house; and they said, Because of the money that was returned in our sacks at the first time are we brought in; that he may seek occasion against us, and fall upon us, and take us for bondmen, and our asses.
19 And they came near to the steward of Joseph’s house, and they communed with him at the door of the house,
20 And said, O sir, we came indeed down at the first time to buy food:
21 And it came to pass, when we came to the inn, that we opened our sacks, and, behold, every man’s money was in the mouth of his sack, our money in full weight: and we have brought it again in our hand.
22 And other money have we brought down in our hands to buy food: we cannot tell who put our money in our sacks.
23 And he said, Peace be to you, fear not: your God, and the God of your father, hath given you treasure in your sacks: I had your money. And he brought Simeon out unto them.
24 And the man brought the men into Joseph’s house, and gave them water, and they washed their feet; and he gave their asses provender.
25 And they made ready the present against Joseph came at noon: for they heard that they should eat bread there.
26 And when Joseph came home, they brought him the present which was in their hand into the house, and bowed themselves to him to the earth.
27 And he asked them of their welfare, and said, Is your father well, the old man of whom ye spake? Is he yet alive?
28 And they answered, Thy servant our father is in good health, he is yet alive. And they bowed down their heads, and made obeisance.
29 And he lifted up his eyes, and saw his brother Benjamin, his mother’s son, and said, Is this your younger brother, of whom ye spake unto me? And he said, God be gracious unto thee, my son.

30 And Joseph made haste; for his bowels did yearn upon his brother: and he sought where to weep; and he entered into his chamber, and wept there.
31 And he washed his face, and went out, and refrained himself, and said, Set on bread.
32 And they set on for him by himself, and for them by themselves, and for the Egyptians, which did eat with him, by themselves: because the Egyptians might not eat bread with the Hebrews; for that is an abomination unto the Egyptians.
33 And they sat before him, the firstborn according to his birthright, and the youngest according to his youth: and the men marvelled one at another.
34 And he took and sent messes unto them from before him: but Benjamin’s mess was five times so much as any of theirs. And they drank, and were merry with him.