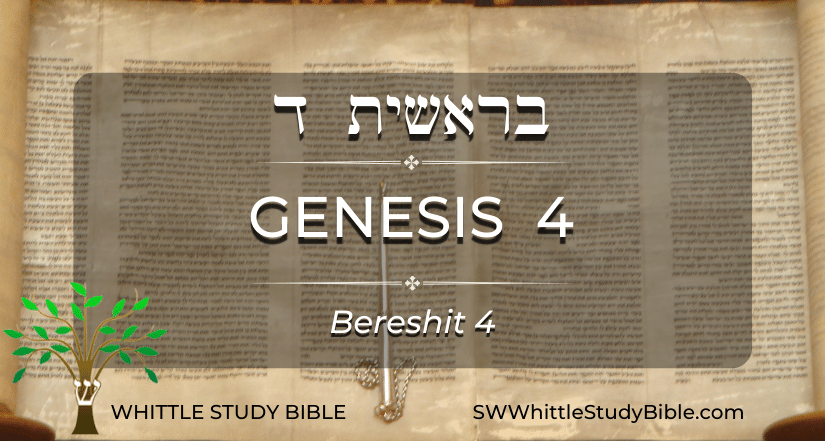 → The Birth & Occupations of Cain and Able

1 And the man knew Eve his wife; and she conceived and bore Cain, and said: ‘I have gotten a man with the help of the LORD.’ 2  And again she bore his brother Abel. And Abel was a keeper of sheep, but Cain was a tiller of the ground.

→ The Murder of Able

3  And in process of time it came to pass, that Cain brought of the fruit of the ground an offering unto the LORD. 4  And Abel, he also brought of the firstlings of his flock and of the fat thereof. And the LORD had respect unto Abel and to his offering; 5 but unto Cain and to his offering He had not respect. And Cain was very wroth, and his countenance fell. 6  And the LORD said unto Cain: ‘Why art thou wroth? and why is thy countenance fallen? 7  If thou doest well, shall it not be lifted up? and if thou doest not well, sin coucheth at the door; and unto thee is its desire, but thou mayest rule over it.’ 8  And Cain spoke unto Abel his brother. And it came to pass, when they were in the field, that Cain rose up against Abel his brother, and slew him.

9  And the LORD said unto Cain: ‘Where is Abel thy brother?’ And he said: ‘I know not; am I my brother’s keeper?’ 10  And He said: ‘What hast thou done? the voice of thy brother’s blood crieth unto Me from the ground. 11  And now cursed art thou from the ground, which hath opened her mouth to receive thy brother’s blood from thy hand. 12  When thou tillest the ground, it shall not henceforth yield unto thee her strength; a fugitive and a wanderer shalt thou be in the earth.’ 13  And Cain said unto the LORD: ‘My punishment is greater than I can bear. 14  Behold, Thou hast driven me out this day from the face of the land; and from Thy face shall I be hid; and I shall be a fugitive and a wanderer in the earth; and it will come to pass, that whosoever findeth me will slay me.’ 15  And the LORD said unto him: ‘Therefore whosoever slayeth Cain, vengeance shall be taken on him sevenfold.’ And the LORD set a sign for Cain, lest any finding him should smite him. 16  And Cain went out from the presence of the LORD, and dwelt in the land of Nod, on the east of Eden.

→ The Descendants of Cain

17  And Cain knew his wife; and she conceived, and bore Enoch; and he builded a city, and calledthe name of the city after the name of his son Enoch. 18  And unto Enoch was born Irad; and Irad begot Mehujael; and Mehujael begot Methushael; and Methushael begot Lamech. 19  And Lamech took unto him two wives; the name of one was Adah, and the name of the other Zillah. 20  And Adah bore Jabal; he was the father of such as dwell in tents and have cattle. 21  And his brother’s name was Jubal; he was the father of all such as handle the harp and pipe. 22  And Zillah, she also bore Tubal-cain, the forger of every cutting instrument of brass and iron; and the sister of Tubal-cain was Naamah.

23  And Lamech said unto his wives: Adah and Zillah, hear my voice; ye wives of Lamech, hearken unto my speech; for I have slain a man for wounding me, and a young man for bruising me; 24  If Cain shall be avenged sevenfold, truly Lamech seventy and sevenfold.

→ The Birth of Seth and Enosh

25  And Adam knew his wife again; and she bore a son, and called his name Seth: ‘for God hath appointed me another seed instead of Abel; for Cain slew him.’ 26  And to Seth, to him also there was born a son; and he called his name Enosh; then began men to call upon the name of the LORD.