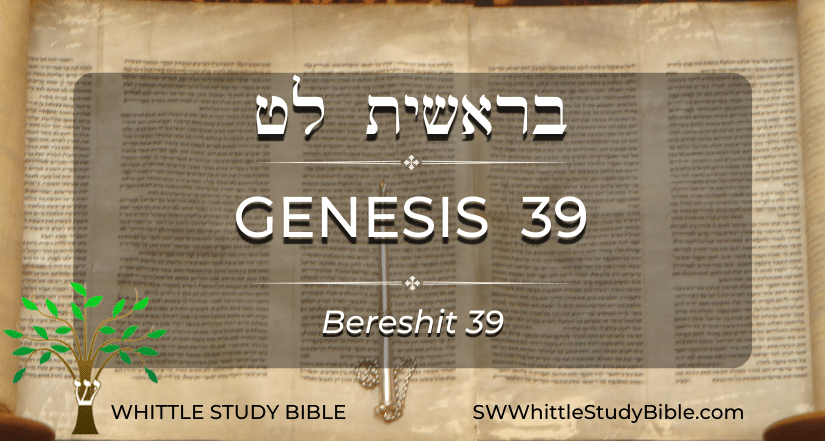 Genesis 39 (Bereshit) is the narrative about Yehovah being with and prospering Joseph while in slavery. The Ishmaelites sell Jospeh to a eunuch named Potiphar in Egypt. He sees Yehovah is with Joseph and promotes him several times. Finally, Potiphar places him over his entire estate.

Potiphar’s wife propositions Joseph to sleep with her. He refuses. This routine continues daily for an extended period of time. Finally, one day she tries to force herself on him. Although he is tempted, he pulls away, runs out of the house but leaves his coat behind. She screams and tells the other servants a false story about the Hebrew slave.

Once Potiphar is home, his wife uses Joseph’s coat as proof and tells Potiphar the false story about his Hebrew slave. He becomes angry and has Joseph thrown into the king’s prison.

Although in the king’s prison, Yehovah is still with Joseph. Yehovah prospers him in the prison. Through time, the commander of the prison places him over the complete administration of the prison.

Parsha Vayeshev #9
~ And he settled ~

1 And Joseph was brought down to Egypt; and Potiphar, an officer of Pharaoh’s, the captain of the guard, an Egyptian, bought him of the hand of the Ishmaelites, that had brought him down thither.
2 And the LORD was with Joseph, and he was a prosperous man; and he was in the house of his master the Egyptian.
3 And his master saw that the LORD was with him, and that the LORD made all that he did to prosper in his hand.
4 And Joseph found favour in his sight, and he ministered unto him. And he appointed him overseer over his house, and all that he had he put into his hand.
5 And it came to pass from the time that he appointed him overseer in his house, and over all that he had, that the LORD blessed the Egyptian’s house for Joseph’s sake; and the blessing of the LORD was upon all that he had, in the house and in the field.
6 And he left all that he had in Joseph’s hand; and, having him, he knew not aught save the bread which he did eat. And Joseph was of beautiful form, and fair to look upon.

39.1 And Joseph was brought down to Egypt; and Potiphar, an officer of Pharaoh’s, the captain of the guard, an Egyptian, bought him of the hand of the Ishmaelites, that had brought him down thither.